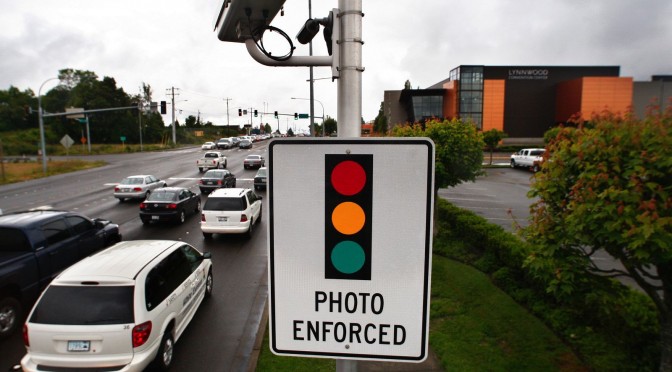 Red light cameras are sold by the companies that install them and the cities that use them as a “safety” feature. Whether or not they actually improve safety is up for debate, but there is no doubt that they are big money makers for the cities that use them. If cities were primarily concerned with safety instead of generating revenue they would get rid of red light cameras and replace them with a yellow light line.

Actually there isn’t much more to it than that. Here’s what a city would need to do to implement yellow light lines:

Intersections controlled by traffic signals have a basic design flaw that red light cameras only serve to exacerbate. Drivers are unsure of how long they have to clear the intersection once the light turns yellow. Should you slow down or speed up? Every intersection has different timing, and when an intersection is equipped with a red light camera that doles out $124 tickets, drivers are much more likely to slam on the brakes even if they could make it through safely. This leads to more rear-end collisions.

With yellow light lines, that ambiguity is completely eliminated with a simple, clear visual. If you’ve passed the line when the light turns yellow, continue on at the speed limit and you will safely clear the intersection before the light turns red. If the line is in front of you, you’ll need to stop. No more uncertainty, no more slamming on the brakes.

In order to help visualize this concept I’ve created this handy calculator. Simply edit the speed limit and/or the yellow light length to see how far from the intersection the yellow light line would be painted.

This section has been added to address some of the objections brought up by Redditors at /r/Seattle.

Indeed, the relevant law here in Washington State (RCW 46.61.055) indicates that it is only illegal to enter the intersection on a red light. However, since the purpose of the yellow light line is not to adhere to strict legal definitions but rather to improve safety, I think it would be best to measure the distance from the end of the intersection rather than the entrance.

How about telling people what you did so they know what the lines are? – Sir_Dude

This is a good point. Above I jokingly said “there is no step 3,” but in reality step 3 would be driver education.

Oh, and how are these lines going to work with heavier vehicles? An SUV is going to need more room to stop than a Prius. One line isn’t going to work for all cars. – Sir_Dude

The yellow light line is not placed based on how long it will take you to stop. The line is placed based on where you can clear the intersection while traveling at the speed limit.

Currently, judgement is all drivers depend on. If you suddenly give drivers a “tip” for determining if they should go or stop, what will change? People tend to be aware of their current speed, their braking capability based on vehicle characteristics, and how far they have before the stop line. – steve_mcgee

It is true that drivers are (or should be) aware of those things. However, what drivers are often unaware of is how long the light will stay yellow, and whether or not that is enough time to make it through the intersection from their location when it turns yellow. This issue is exacerbated by the fact that different intersections have different yellow light timing. The yellow light line is a simple way of providing exactly that piece of information to drivers.

Light timing changes (gets shorter) on many intersections late at night. The timing would be off on clearing the intersection or you’d need two lines. – eran76

The overall cycle of a given traffic signal may get shorter at night, but the length of time the light is yellow is constant regardless of how long the light stays red or green, and does not change throughout the day.

Like this idea? Contact your local city council and point them to this post. Share it on your favorite social media site and spread the word. Or if you’re really ambitious, file a statewide citizen’s initiative. If you feel like living dangerously, you can run the calculator for the intersections in your neighborhood, grab some yellow paint, and engage in some “Guerrilla Public Service” like L.A. artist Richard Ankrom, who installed his own freeway sign in 2001.

I’ve also provided a handy embed code above so you can easily share the yellow light line calculator.

Or maybe you think I’m a clueless idiot and this is an incredibly stupid idea? Point out the flaws in my logic in the comments below.

As always, thanks for reading.