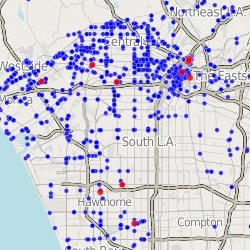 I love stories of people or companies using data in interesting ways, and today I came across a great one.

From the Los Angeles Times: 6,297 Chinese restaurants and hungry for more

[Los Angeles attorney David] Chan, 64, has eaten at 6,297 Chinese restaurants (at press time) and he has documented the experiences on an Excel spreadsheet, a data-centric diary of a gastronomic journey that spans the United States and beyond.
… Chan was eating at new restaurants faster than they could open up. Soon there wasn’t a single one in the area he hadn’t tried, but still, he was unsatisfied.

In 1985, he hit 86 restaurants in the Los Angeles area and around the country. The next year, 119. Before long he was trying more than 300 restaurants every year.

In Toronto, he hit six dim sum restaurants in six hours. When he traveled for business in Florida, he zigzagged the state to sample 20 Chinese restaurants.

Chan had always wanted to travel to all 50 states, and Chinese food gave him an excuse. In places he would have never imagined, he found Chinese people with their own version of Chinese food.

They’ve also created a neat interactive timeline visual of the LA-area visits documented in Chan’s spreadsheet, a static portion of which I’ve excerpted above.

The article doesn’t really get into the details of how he’s kept his list, or what types of information he keeps about each visit aside from the date, location, decor, and his order. Since he started his list in 1955, he must have kept it in a paper journal for decades before taking the time at some point to transcribe it all into Excel.

That is a seriously impressive dedication to data.