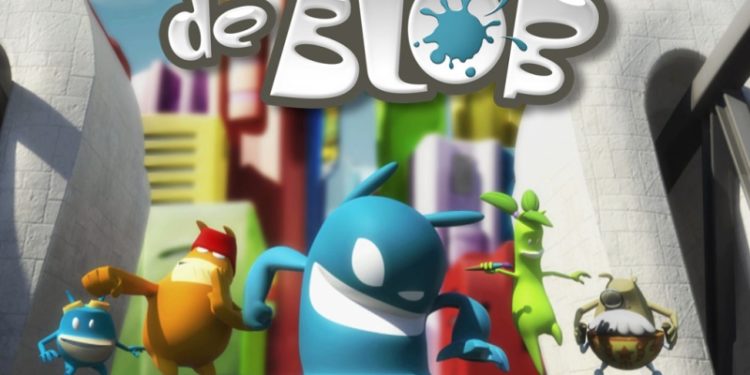 Verdict: Groovy!
In a Nutshell: Jump, hop, and splat to the groovy beat as you bring a glorious array of color to a series of drab gray cityscapes.

“A mischievous and unlikely hero, only de Blob can flip, bounce, and smash his way past the all-powerful I.N.K.T. Corporation to launch a revolution and save Chroma City from a future without color. Battle against massive tank battalions, speedy I.N.K.T. racers and elite Inky soldiers on your quest to free the citizens of Chroma City.” 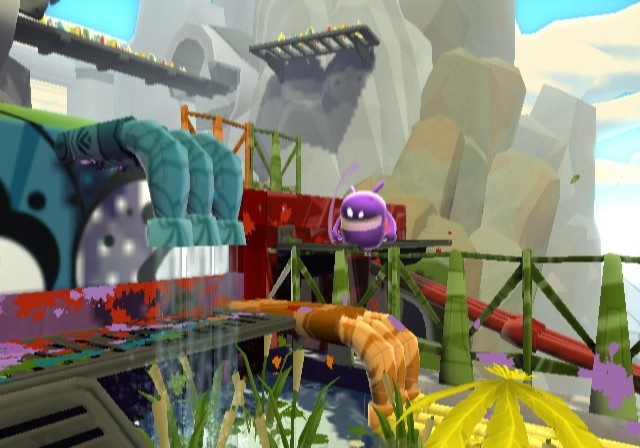 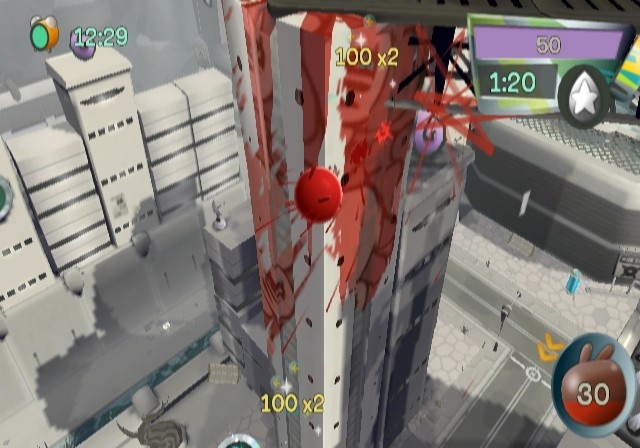 The basic goal of the main levels in de Blob is to paint. Roll around ten different cityscapes, moving de Blob with the analog stick on the nunchuck. Swinging the Wii remote sharply in any direction causes de Blob to jump, while holding the Z-button and swinging the Wii remote will target and jump directly on various things (enemies, paint canisters, and certain building weak points).

Hit paint vials of red, blue, and yellow to turn de Blob different colors and build your paint meter up to 100 points. Mix red and blue for purple, yellow and red for orange, etc. Painting buildings and other structures drains your paint meter.

The one thing that can hurt de Blob is ink, which is spread throughout the levels in pools, and is shot at / beat down on de Blob by various enemies. Get “inked” and your paint meter will begin depleting. If you don’t find some water to wash off the ink before you get to zero, you’re dead. Thankfully when you die, the buildings stay painted, you just get sent back to the last gate.

Each level starts you off with a 20-minute time limit, but you can extend this by completing various challenges spread throughout the level, painting entire blocks and freeing the “Raydians” trapped inside, or by finding clock icons. I never felt hurried, and only came close to running out of time on the final level (more on that later), but my less video-game inclined wife did have time expire a few times when she gave the game a try. 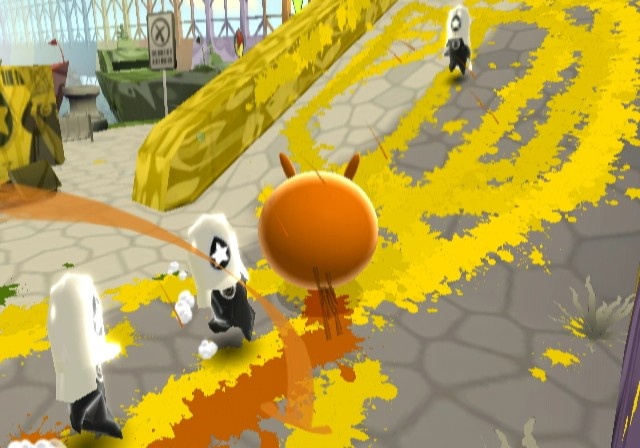 Playing de Blob is just plain fun. Think about being poked in the eye with a stick… it’s like the extreme opposite of that. The open-ended nature of the level design allows you to pick and choose how you play each level. If you enjoy challenges, you can do every challenge. If you just want to paint, you can just paint like crazy and usually get enough “paint points” to progress through the levels.

Bouncing around, bringing life to the rich environments is a simple pleasure that few games seem to be able to deliver recently. It’s like being a kid again, running around your back yard on a warm summer day, laughing and playing in the sprinkler.

What really brought it all together for me when playing de Blob was the music. The upbeat, jazzy tracks are fun and engaging. The music is also highly interactive with the environment. At the beginning of each level there actually is no music at all, then as you paint more of the area, the music slowly builds until it reaches maximum groovitude.

Adding to the enjoyment and engagement with the music is the delightful touch that each time you paint a building a new color, a little flourish is added to that particular beat, which changes depending on what color?sax when you paint something red, electric keyboard for purple, etc. 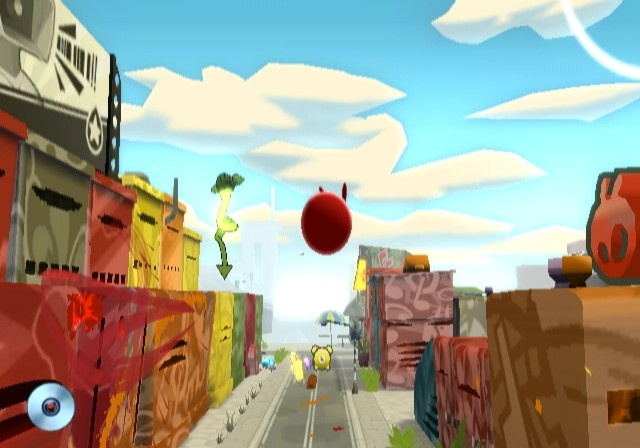 The first 95% of the game was an absolute blast. Unfortunately, for some inexplicable reason the designers felt compelled to put in a sort of “final boss” level, which felt utterly out of place with the rest of the game. The first nine (and a half) levels are a laid back, relaxing affair, where you’re free to do basically whatever you wish at more or less your own pace. Then, in the last half of the last level, the time limit is noticeably shorter, giving the section much more of a rushed feel. At the end of the level there’s a big “boss fight” type of encounter, in which the entire feel of the game switches from laid back puzzle platforming to a high-stress precision action platform fight-type thing—yuck.

I still left with an overwhelmingly positive impression of the game, but it would have been so much better if they had just kept the last level like the nine before it. It’s like enjoying a delicious berry sundae, but then you get to the bottom and—what the hell—why is there a brussel sprout in here?!?

There was also one minor glitch I encountered when the inability to jump while on top of rocks caused de Blob to get completely stuck between a pair of rocks halfway through a level, leaving me with only two choices: wait 15 minutes for time to expire, or quit the level and lose all my progress. Super-lame, but at least it only happened once.

I would highly recommend de Blob to anyone that likes to just have fun. There are very few frustrating/overly difficult puzzle-solving moments, and even those challenges that are killjoys can simply be skipped. My one piece of advice would be that if you’re not a completionist (like myself), just skip the last level altogether.