The Ghostbusters are back in an all new story penned by the original creators! With Manhattan newly overrun by ghosts and other supernatural creatures, it’s up to you to take on the role of a new recruit joining the original fim cast of the famous Ghostbusters team. Equipped with a variety of unique weapons and gadgets, you will hunt, fight, and capture a wide range of uncanny phantasms and demons in an all new funny and frightening battle to save New York City from its latest paranormal plague. 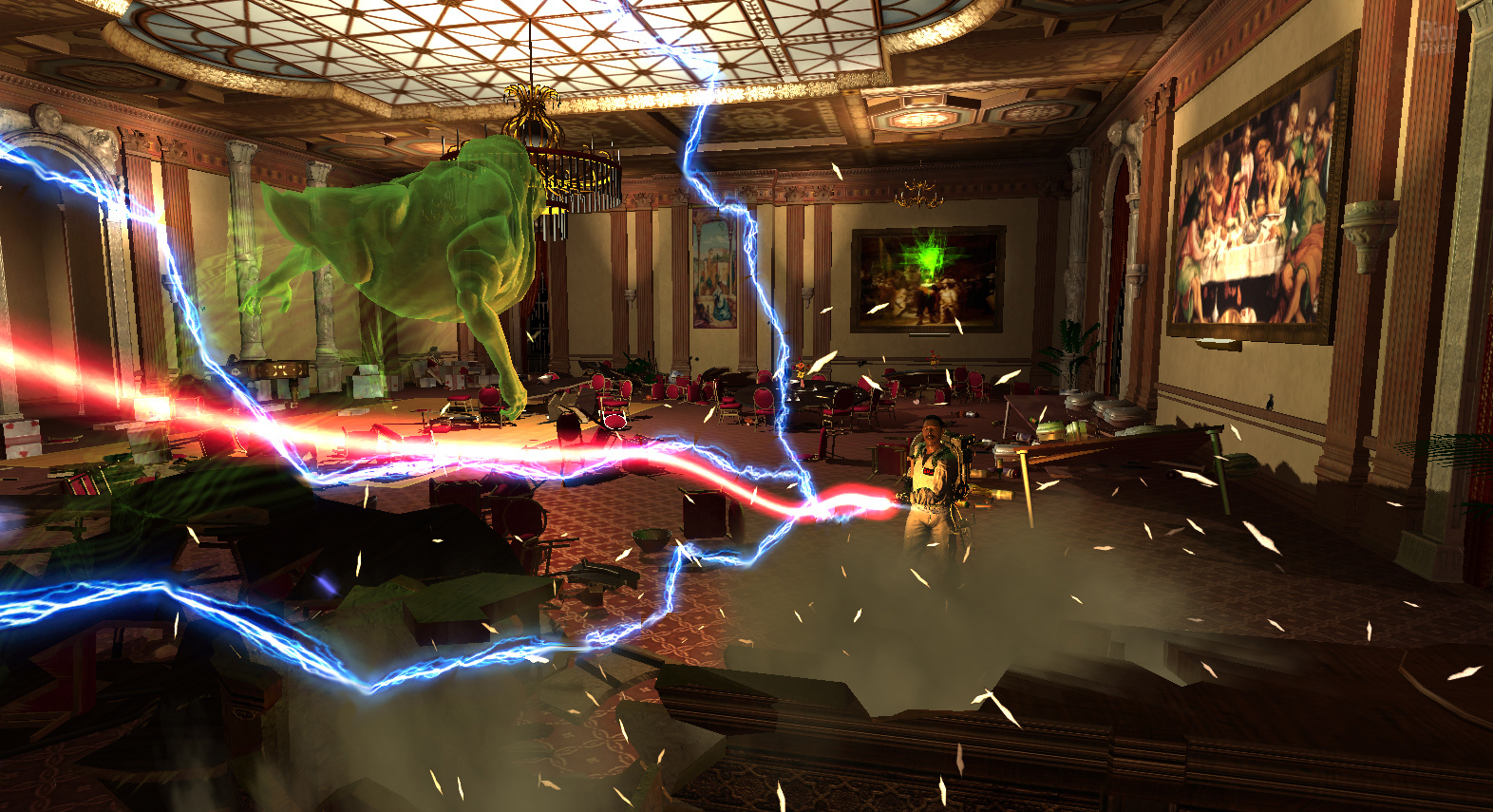 [The Tim:] You are nameless joe, the just-recruited fifth Ghostbuster. The game controls like a standard 3rd-person shooter. Left stick moves you, right stick turns your view. The right trigger fires your currently-active weapon, the left trigger fires your weapon’s secondary. A interacts with the environment, hold B to run, X tosses out a ghost trap, and Y enables your PKE meter, which provides an augmented first-person view of your environment, crucial for detecting ghosts and other spirit world extras.

Weapons come in four flavors, which you select using the d-pad. Up selects your proton pack, which works just like you would expect from the movie. Left selects the dark matter generator, which has a freeze-ray type of thing as its primary, and basically acts as a shotgun when you fire the secondary. Down selects your slime, which lets you shoot slime and slime tethers. Finally, right selects your meson collider, which is like a sniper rifle, with an added homing feature. 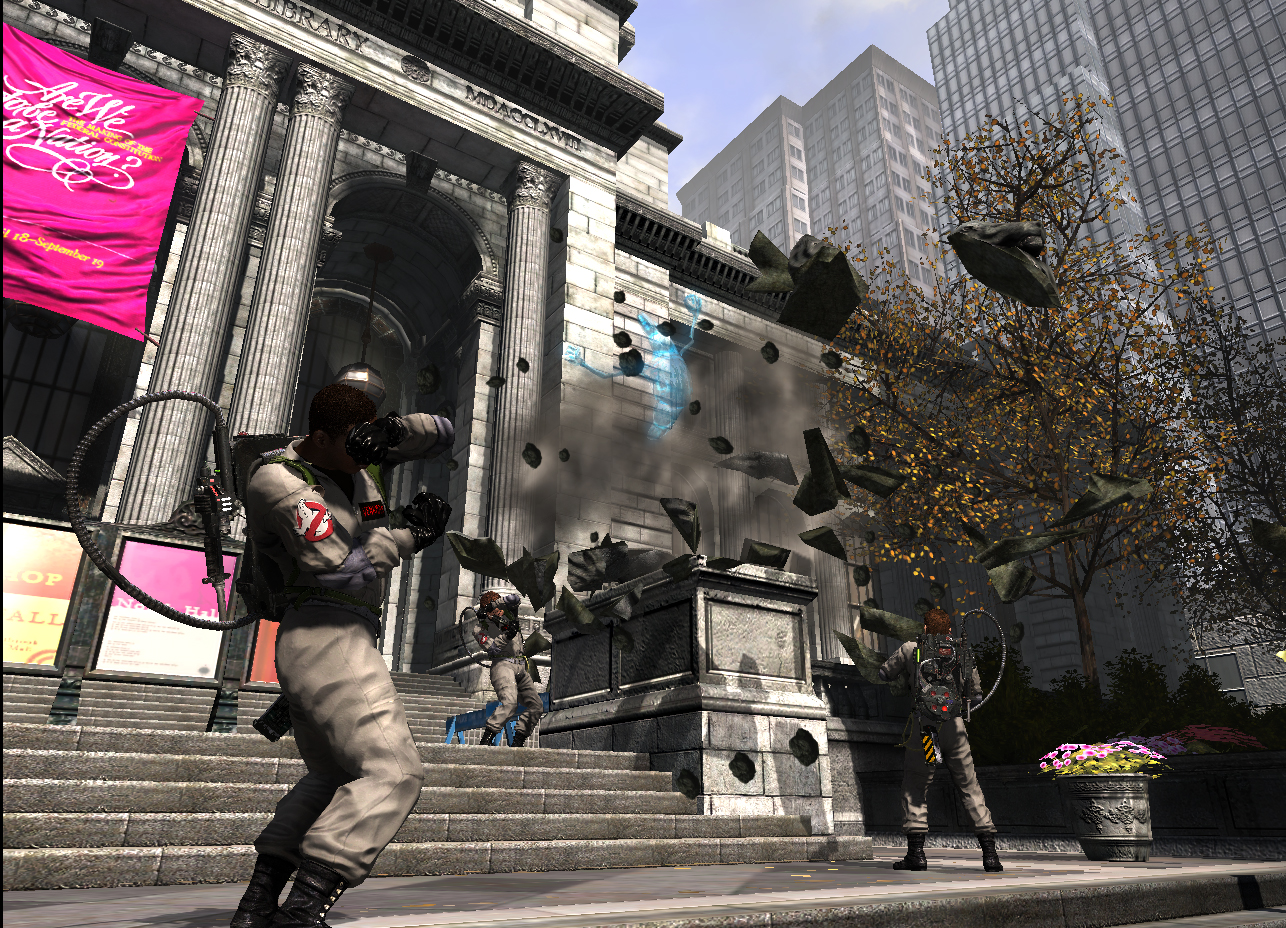 [The Tim:] Obviously the biggest draw in this game is the reunion of the Ghostbusters gang. The return of Aykroyd, Ramis, Murray, Hudson, and crew was just as fun as I expected it to be. I also really appreciated that Rick Moranis’ Louis Tully was given a nod even though he declined to participate. Classy.

The weapons that were taken from the movie were also loads of fun. Wrangling ghosts with the proton pack and flinging slime all over the place is a blast. Overall the game plays well and does a decent job of avoiding the “cheap cash-in” feel of many movie tie-in games. With an original plot and good gameplay mechanics, the game kept my attention from start to finish, even through some occasional annoyances.

[theoMastah:] The Proton Pack is amazingly fun – it is easily used for lots of Ghost-busting, but it still provides a challenge (such as the pack overheating, causing you to use a little strategy in doling out the hurt). The plot is great as a direct sequel (some might even say “culmination”) of the plots of the two films. To go with a great plot (written by Harold Ramis and Dan Aykroyd) is a great cast – the return of the original Ghostbusters, Annie Potts as Janine, William Atherton as Walter Peck, and more! You, however, play the rookie, who is the equipment field tester – a great addition to the Ghostbusters team.

Fans of the movies will enjoy seeing all their old enemies escaped from incarceration… so that you can blast them in the face! It’s not just old enemies, though, there’s plenty of new ones as well as creative, original uses of the old ghosts. The locations and visuals are great, and the fact that almost all of the XBox Achievements are named by using quotes from the movies is just gravy. 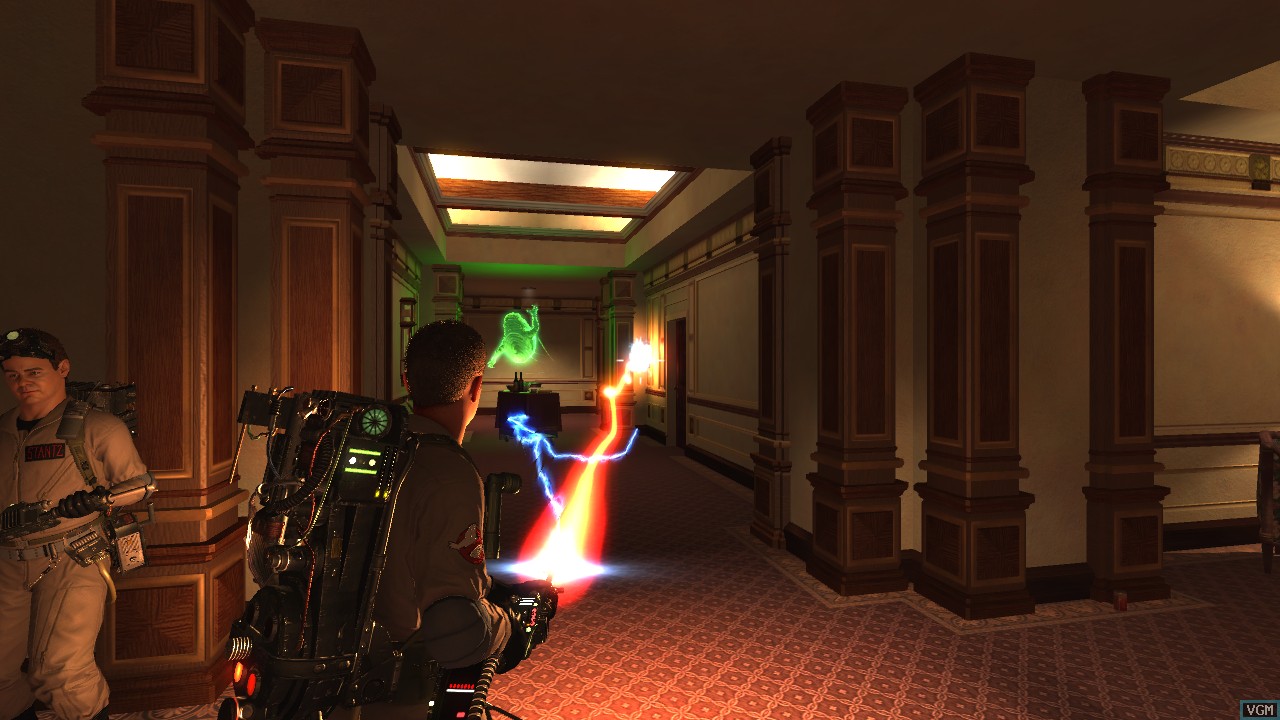 [The Tim:] When you play a game on the hardest difficulty, you sometimes run into some very questionable design choices. For example, why oh why did the developer decide to put a bunch of unskippable dialogue immediately after save points that come right before some of the game’s hardest sections? If I had to hear Winston tell me to “try using slime tethers” one more time, I think I might have snapped. Also, why isn’t it easier to go back and play a level after you’ve beat it in the campaign?

The only other thing that really bugged me was the wildly varying difficulty. Some parts of the game were a total cakewalk, while others had me reloading and re-hearing all that unskippable dialogue dozens of times. As theoMastah mentions below, one of the oddest parts about this phenomenon was that the final boss was one of the easiest boss battles in the game, and far easier than some mid-level battles.

[theoMastah:] I encountered a few camera problems, as well as some troublesome AI on the part of my Ghosbusters partners. Some portions of the game were a bit unclear, such as how to kill one or two bosses, and how to unlock certain doors.

Also, the game required that the player use the PKE Goggles too often. Not only did they have a great thing going with the third person shooting (a la Gears of War), but the game would not even allow the player to shoot while wearing the goggles. You always automatically took them off when you pulled the trigger. The PKE Goggles make you move slower, you can’t run while wearing them anyway (as with shooting, you take them off to perform this action), and they aren’t always necessary to what you’re doing anyway. I would have liked to see these less.

Finally, what’s with the difficulty of the final boss? I feel like I could have put my Proton Pack on “Blow Hot Air” mode and knocked him over. I would have liked to see a little more difficulty on that one. 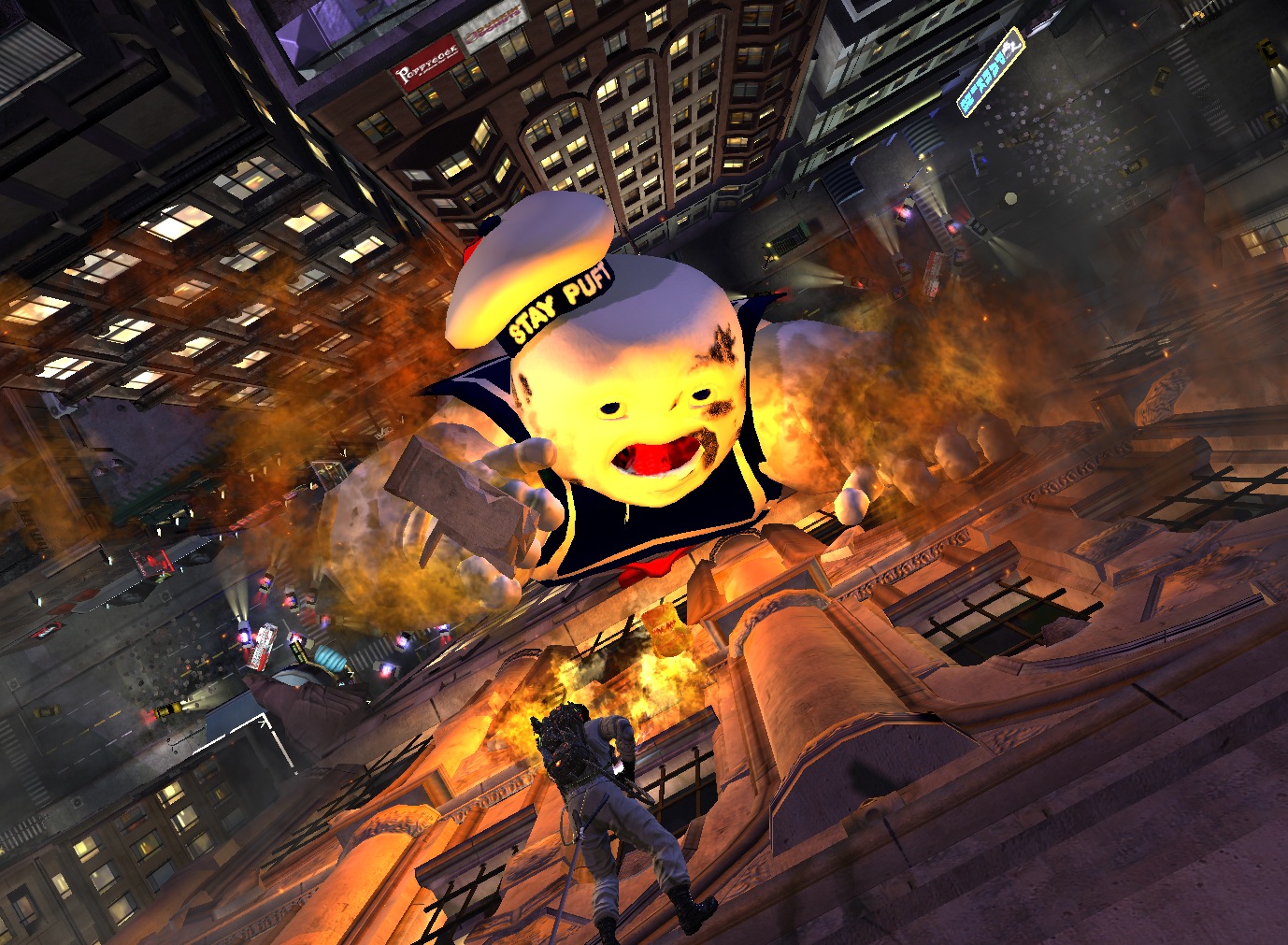 [The Tim:] At the now bargain-bin price of $20, Ghostbusters is easily a must-have for any fan of the movies. At that price, it’s probably even worth picking up if you’re just a fan of 3rd-person shooters who has never heard of the original source material.

[theoMastah:] If you like the Ghostbusters films at all, you will enjoy this game. It’s not too complex, is a decent length, and has lots of story to revel in.