Verdict: Running around stabbing dudes is funner than ever!
In a Nutshell: Top-notch third-person exploration and stealth, wrapped up in an interesting story with a ton of varied side missions to keep you busy for hours on end.

Assassin’s Creed 2 is an epic story of family, vengeance and conspiracy set in the pristine, yet brutal, backdrop of a Renaissance Italy. Ezio befriends Leonardo da Vinci, takes on Florence’s most powerful families and ventures throughout the canals of Venice where he learns to become a master assassin. 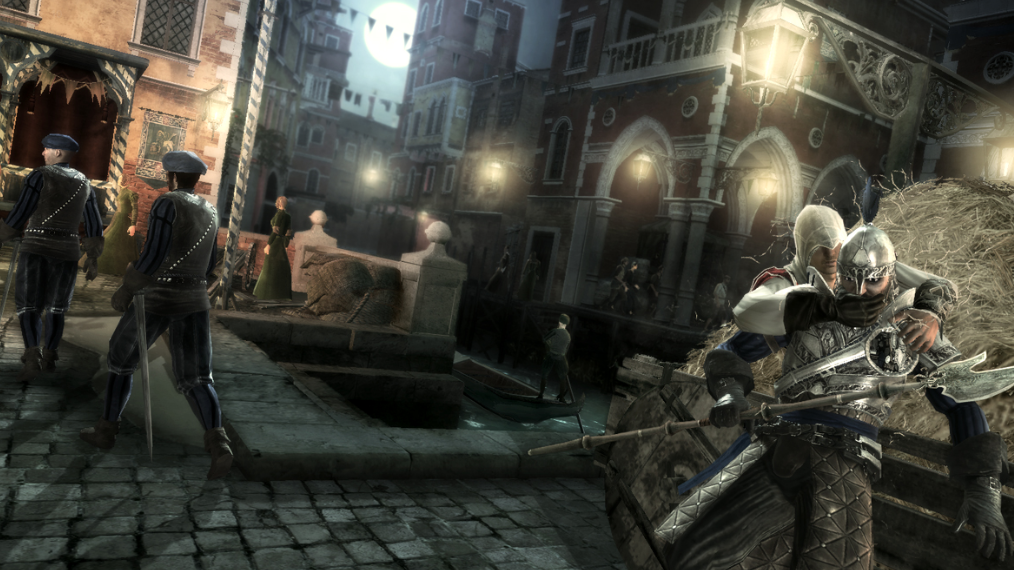 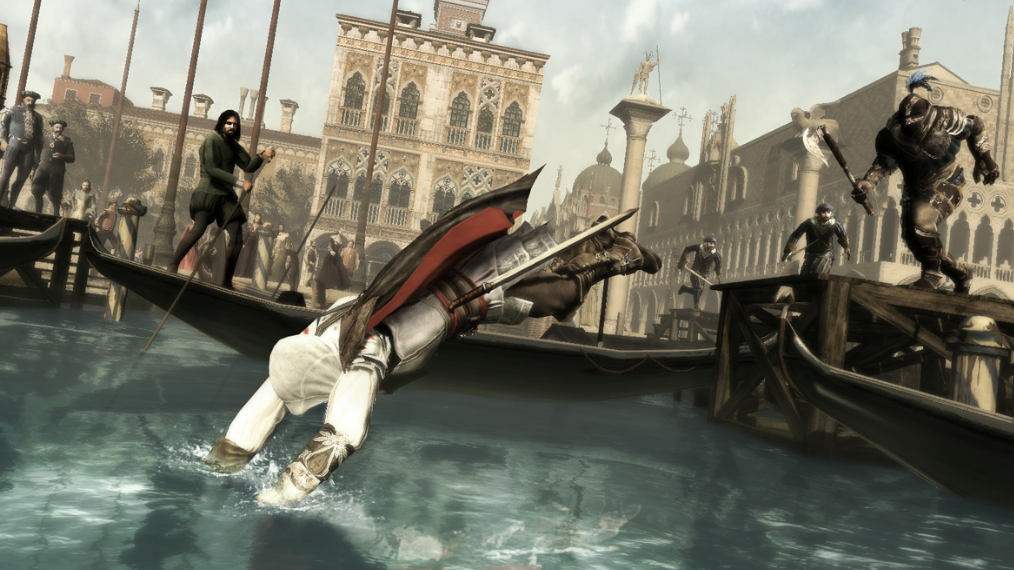 If you’ve played the first Assassin’s Creed, you’ll be right at home with ACII. Move the left stick to move Ezio, move the right stick to move the camera. Press A to steal, B to push, X to use your weapon, and Y to use “eagle vision.” Hold the right trigger to go into “high profile mode,” which allows you to run with the left stick, sprint with A, punch with B, and assassinate with X. Holding the right bumper brings up your weapon inventory, and the left trigger allows you to lock on to enemies.

As in the first game, Ezio is able to climb basically anything that sticks out of any building more than a few inches. Just walk up, press the right trigger, and start climbing. Throughout the game you’ll learn a variety of new tricks, including a nice new jump-climb move that helps you get to even higher places than before. 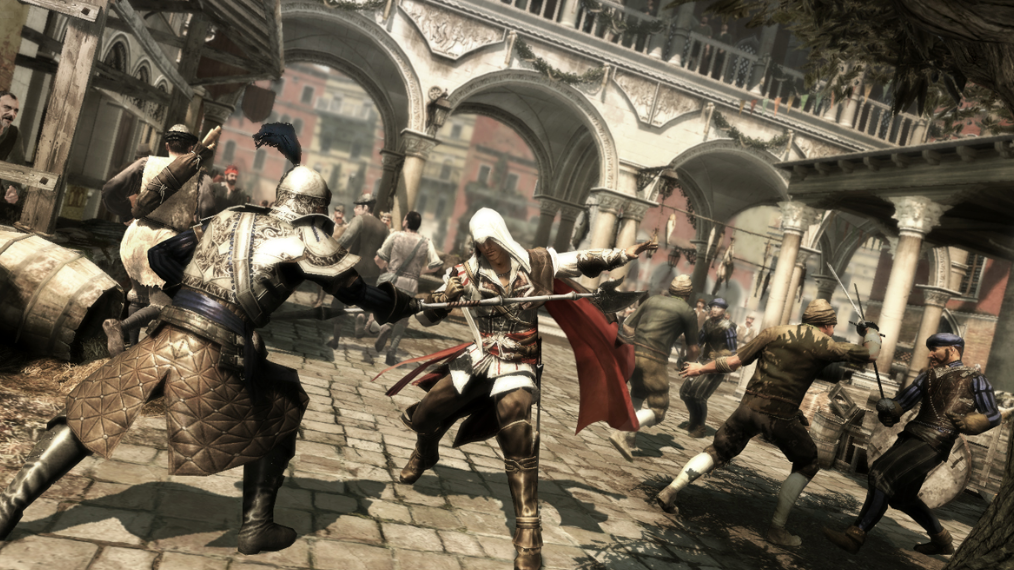 While I personally thoroughly enjoyed the first game, what few complaints I did have were addressed quite effectively in ACII. First and most importantly, stealth is a much bigger deal in ACII. There were quite a few missions in which Ezio is required to remain undetected and failure to do so will force you to restart the mission. In order to accommodate this increased emphasis on stealth, the game has added new ways to stay hidden. The most noticeable improvement in this area was the ability to “blend” with any crowd of three or more people on the street. Sweet.

The other big improvement in ACII is variety. While cavorting about knifing unsuspecting guards on the rooftops of Italy, I never really got the feeling that the missions were repetitive. There are a handful of race, beat up, and delivery missions, but they are far outnumbered by the “assassination contract” missions—a side mission sub-type that has a nice variety of its own. One example of a unique assassination contract requires you to take out ten heavily armored guards within a span of just two minutes. 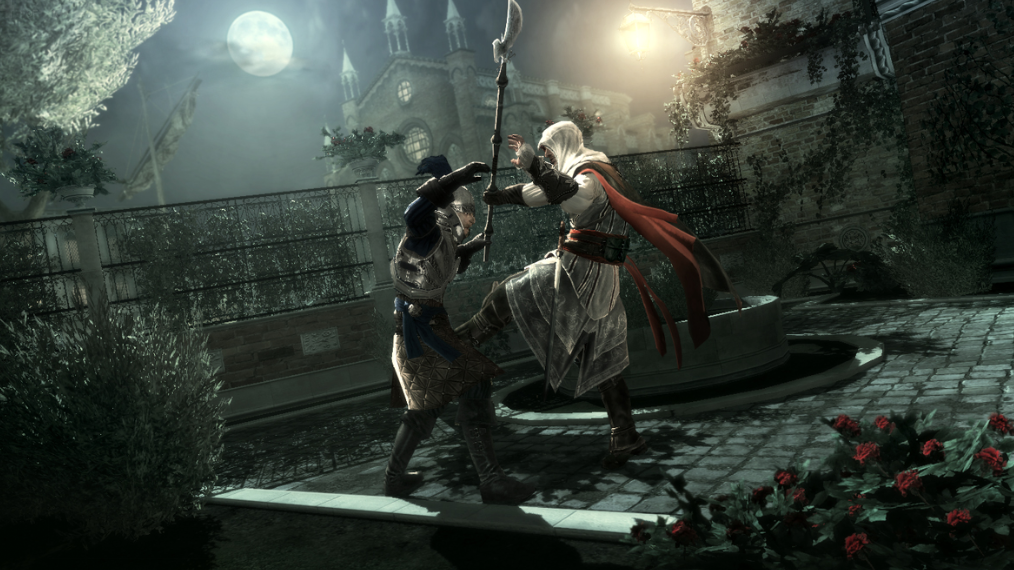 My only real complaint in ACII is that sometimes when Ezio breaks into “free run,” it can be fairly difficult to control exactly where he’ll jump. This can be especially frustrating when you’re playing one of the missions that depends on speed.

As a minor issue, I thought that the stagecoach and flying machine levels felt a little like afterthoughts. As if the game was mostly done and some CEO took a look at the almost-completed product and said “looks good, but can we add a few vehicle levels?” They were fun enough, but just felt out of place. 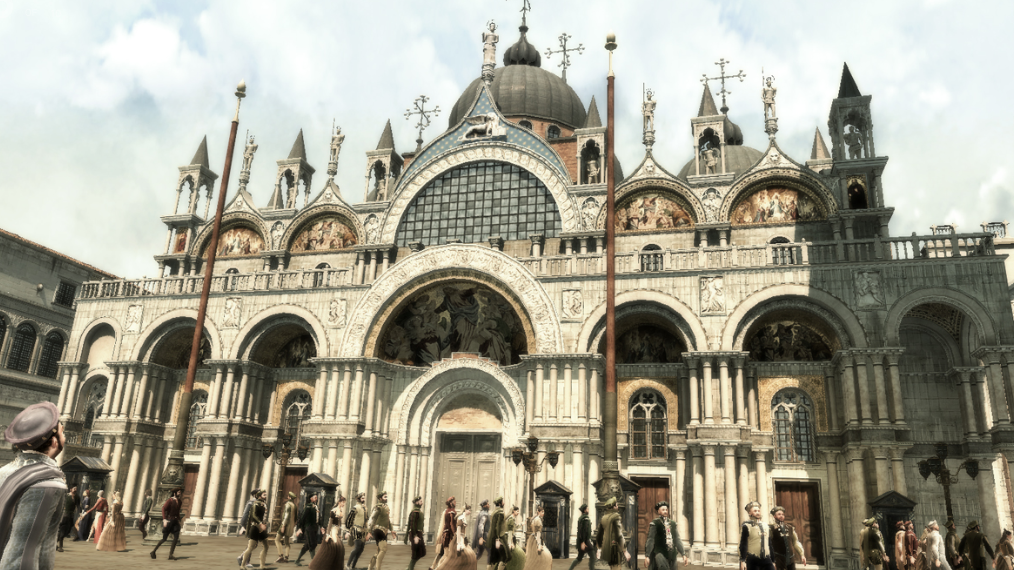 Assassin’s Creed II delivers a much more refined experience than the original, combining a great story and an engaging variety of missions in a lively and beautiful setting, while putting a greater emphasis on stealth. If you’re into third-person action/adventure games at all, you’re doing yourself a disservice if you skip this game.