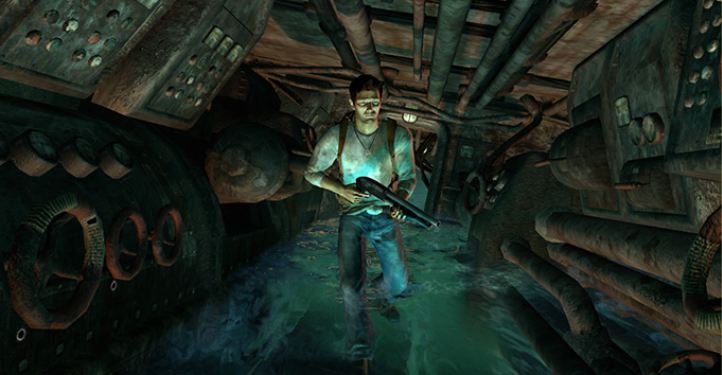 Verdict: Glad I only spent $25.
In a Nutshell: Lazy gameplay design choices and overuse of clichéd mechanics nearly ruin an interesting story and some amazing scenery.

A 400-year-old clue in the coffin of Sir Francis Drake sets a modern day fortune hunter, Nathan Drake, on an expedition for the fabled treasure of El Dorado, leading to the discovery of a forgotten island in the middle of the Pacific Ocean.

The search turns deadly when he and his party become stranded on the island and hunted by modern-day pirates. Outnumbered and outgunned, he must fight to survive as he begins to unravel the terrible secrets hidden on the island. 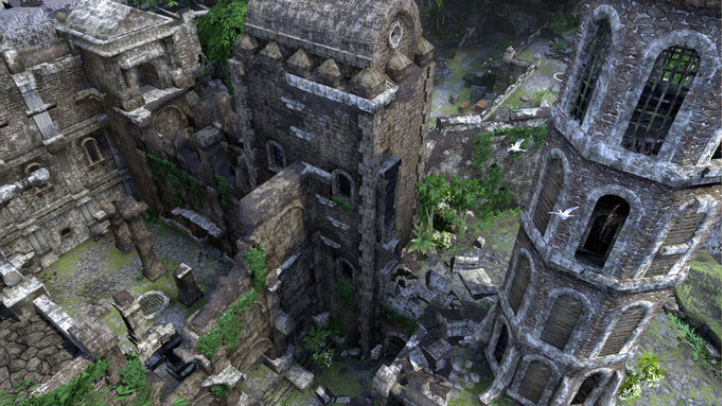 Being a third-person shooter, Drake’s Fortune controls pretty much just like you would expect it to. Left stick moves Drake, right stick moves the camera. X is for jumping and climbing, triangle is used to pick up weapons and interact with the environment, circle gets you into cover or performs a rolling dodge, L1 aims, R1 shoots, and the d-pad selects your weapon. Pretty standard stuff here.

There are a handful of sequences sprinkled throughout the game that diverge from the traditional third-person shooter style and switch to more of a third-person platformer feel, jumping and climbing up walls and structures like the one pictured above. In these sections, the camera is often fixed on a certain angle to clue you in to where you need to go next. Otherwise, the controls are the same as the rest of the game. 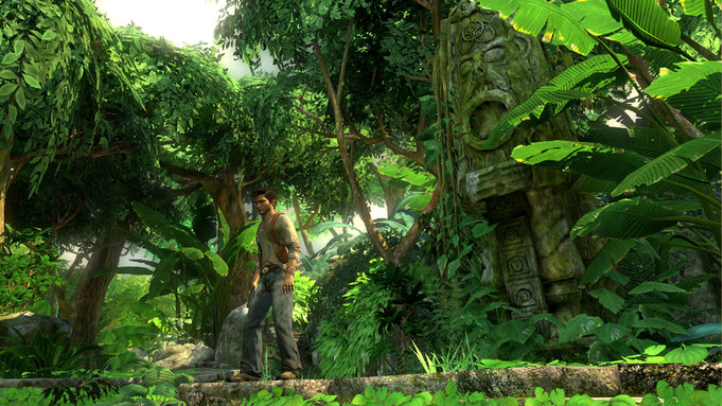 The game is pretty, there’s no doubt about that. From the lush, green jungles (pictured above) to the detailed ancient city, there is a lot of eye candy in this game that is fun just to look at.

I also appreciated the thought that went into the game save / death system. Checkpoints are sprinkled pretty liberally throughout the game, and when you die, you instantly start back at the most recent one. I never really had to repeat enough of the game to make it really frustrating when I died, which was nice. Also, if there was any dialog since the last checkpoint, it doesn’t repeat every time you restart after dying—I definitely appreciated that.

Drake’s Fortune moves fairly seamlessly between action and cut-scenes, which is a nice touch. All throughout the campaign there were sections where you walk to a certain trigger point and a cut-scene begins, running entirely in the game engine. This style really helped to tell the story in a way that didn’t jar you out of the game abruptly.

Speaking of the story, I enjoyed the story, which had enough interesting plot twists and turns to keep me engaged through the whole game. In fact, the well-written story is probably the only reason I played this game through to the end.

It could be that I’ve been spoiled by the amazing platforming skills of the title character in Assassin’s Creed (which came out about the same time as this game), but I found the platforming portions of Drake’s Fortune to be more frustrating than they should have been. It was way too easy to inadvertently fall off a ledge or jump in the wrong direction and plunge to your doom.

For a game that the developers obviously were attempting to make into a cinematic experience, Drake’s Fortune sure is packed with way too many incredibly lame video game clichés. Here are just a few examples…

Our unwitting hero Drake wanders into an empty room. Whoops, he just passed some invisible secret line halfway through the room and suddenly a dozen bad guys with guns jump out and start shooting at him. Oh, now you think you’ve cleared the room? Think again—you just crossed another invisible secret line on the other side of the room, triggering a bunch more bad guys to stream in behind you, through rooms that you just cleared.

Speaking of the bad guys with guns… No matter how remote the area is that you just climbed over all kinds of crazy ledges and jumped over crevices to reach, somehow it will still be littered with well-armed enemies. Jet-skiing down the river? Bad guys on the ledges above you. Just entered a secret cavern that you had to decode not one but two ancient puzzles just to open the doors? Guess what, the bad guys are there waiting to riddle you with bullets. Oh, and when it finally becomes too ridiculously improbable for the bad guys with guns to be lying in wait for you, they invent a whole new breed of bad guy, just for the occasion. How thoughtful of them.

The inexcusably lazy gameplay design choices all come to a head with the final boss fight on a big freighter. The last chapter begins with a firefight in a room with five of the aforementioned bad guys with guns. Four of these enemies are shooting at you with MP-40s, and one is using a pistol with a laser-site. Now, it is important to note at this point that the laser-site enemies were introduced earlier in the game with an in-game hint teaching you to press circle to roll and dodge the laser sites to avoid letting them get a lock on you.

Oh but guess what. For some reason this particular laser site bad guy takes about half a second to aim and fire on you, and if he gets a clear shot, it always kills you immediately. And don’t even think about pressing circle to roll. If you’re out in the open, this guy gets a shot on you and kills you right away. Boom, dead. Plus as an added bonus, as soon as you kill the other 4 guys in the room, laser site guy runs off to fight you in the next room with a whole new wave of MP-40-wielding dudes.

So at this point, I get clever, thinking “I know, I’ll kill 3 other guys, then take out Mr. laser site guy.” Bzzt—wrong. I empty a dozen shotgun rounds at this guy with no effect at all. That’s when I finally realize—Mr. laser site is the final boss, and you’re simply not allowed to kill him before the appointed time. Of course, meanwhile he is hiding behind crates and taking 1-shot kill pot-shots at you in two different firefights leading up to the final encounter.

When you finally get to the big showdown, I hope you’re not looking for a satisfying match-up where you can use your ingenuity and cunning to finally best this cheap bastard. You get to the top of the ship where there are 3 wooden crates, so you duck behind the first one as he starts firing. Oh, and did I mention that you have somehow managed to lose your gun? How delightfully convenient. Even still, you might think at this point that there would be multiple ways to try to take this guy out. YOU WOULD BE WRONG.

If you do ANYTHING other than the exact, specific sequence of moves imagined by the developers, you die instantly and start the encounter over. I probably died 30 times in less than five minutes trying to figure out the magical secret sequence necessary to take this jerkface out.

And even after you finally figure out how to get from the first crate to the one closest to this guy, you are rewarded with a rapid-fire sequence where you get about a quarter second to react as different controller button logos flash up on the screen.

PRESS SQUARE! Oh, you took half a second to press the button, you’re dead.

Basically, Drake’s Fortune easily wins the title of the most frustrating boss fight I have ever played. 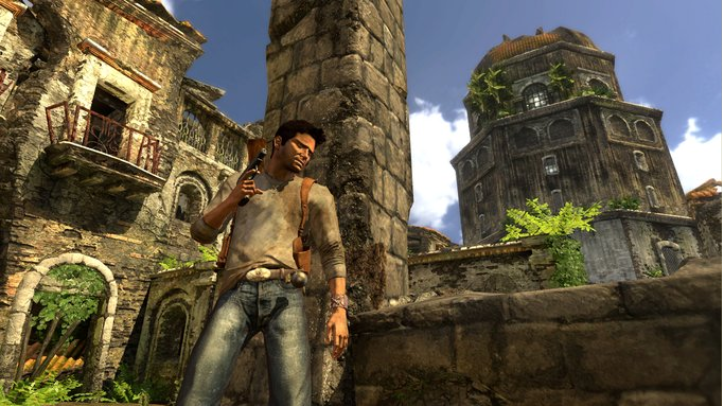 In total, Drake’s Fortune was a marginally enjoyable experience.

Unfortunately my enjoyment of the detailed scenery, engaging story, and fluid cut-scene integration were nearly overshadowed by a liberal helping of lazy gameplay design choices and ridiculous video game clichés.