Verdict: *Yawn*
In a Nutshell: A tantalizing array of play modes and options are locked up inside an impenetrable prison of near-unplayable controls.

Rise to stardom as you take on the Pool halls toughest opponents. Select and play a vast collection of different styles of Pool, Snooker and Billiards!

Battle your way through tournaments set in exotic locations!

Play your favorite game in Arcade, Tournament or Exhibition mode. Take on a AI character or battle it out with a friend in multiplayer mode!

Customize your character and unlock collectables to pimp your own crib!

Do what it takes to be a Pool Hall Pro! 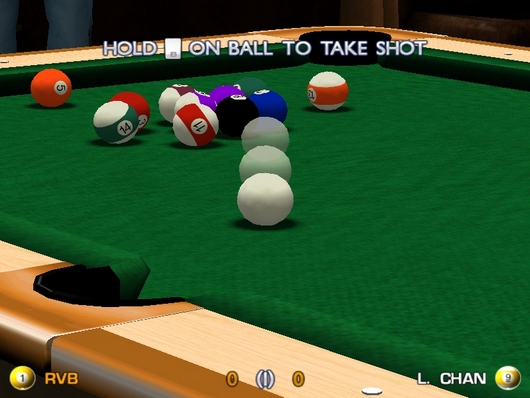 When you first launch the game, you will be asked to set up a profile. Immediately upon doing so you are thrust into a sort of primitive and nearly unusable character design mode, where you select the looks of the avatar that will represent you throughout the game. Considering that this is the kind of thing Nintendo, Sony, and Microsoft have all managed to make relatively engaging and easy to navigate, it was not a promising sign that right off the bat something so simple was so un-fun.

As you set up your profile you are also asked to select which control method you prefer: “Normal” or “Advanced.” I’m pretty sure that refers to the degree of frustration that you wish to subject yourself to during game play.

In “Normal” mode, you aim with left and right on the d-pad, point at the spot on the ball that you want to hit, hold B, pull back on the Wii-mote—while keeping the Wii-mote pointed at the screen—then release B when the power is at the desired level. In “Advanced” mode, you must pull the Wii-mote back and thrust it forward—all the while still keeping it pointed at the screen—to determine the level of power for your shot. In practice, the power of shots in “Advanced” mode is basically random. I was left wondering whether the developers actually even tried to play their own game. 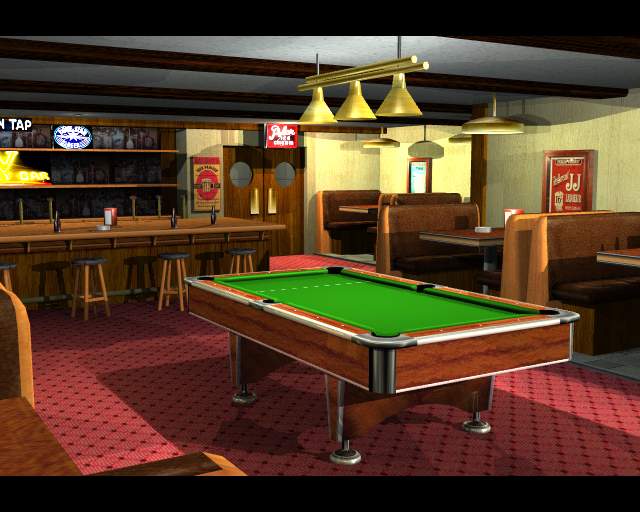 If you’re really into pool, but also suffer from crippling agoraphobia and cannot afford to buy your own table, Pool Hall Pro may be just the game for you?

With eleven different game modes, including US 8 ball, UK 8 ball, 9 ball, and Snooker, you certainly cannot say that the game lacks variety. Furthermore, arguably the most important aspect of a billiards video game—the physics of how the balls roll around the table—was at least believable for the most part.

Some of the environments were also fairly well done. In one location you play atop a roof in Chinatown. That was pretty entertaining to look at for the five or ten seconds that they were zooming around at the start of the match. Oh, and the main menu has a fairly sharp look to it, plus the game disc looks like an 8-ball. Those count for something, I guess. 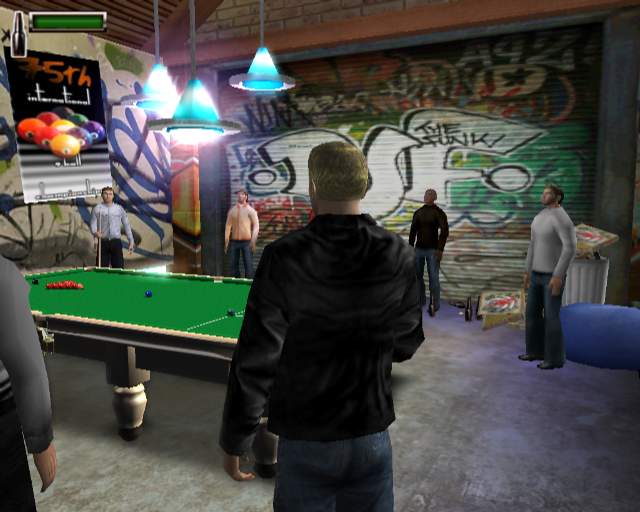 As mentioned earlier, the control scheme is quite frustrating. This is not helped in any way by a camera that has very limited control. You can zoom out, but only to a point. You can rotate your view, but it rotates where you’re aiming at the same time. Your view of the table is locked, centered on the cue ball at all times. After you make your shot, the camera stays in whatever position it was in when you shot, zooming out in a bizarre and disconcerting manner if the balls are about to go out of your field of view.

Also, the controls aren’t even consistent. When your opponent is shooting, you can hold A to fast-forward the ball physics. But after you hit the cue ball, pressing A does nothing.

Due in no small part to the terrible controls, the pacing of the game feels far too slow. By the time I get three or four shots into a match, I’m already bored.

The music consists of a series of mind-numbingly repetitive tracks that sound like they probably could have been achieved on the Super NES. The spectators that are sprinkled throughout the game are disturbingly plastic, and make an odd, muted thumping noise as they applaud a successful pocket.

While Pool Hall Pro does a decent job of replicating the game rules and physics, a nearly unplayable control scheme and horrible pacing completely killed any chance I may have had of enjoying this game. Frankly, I had many times more fun playing the Monkey Billiards mini-game in the original Super Monkey Ball.