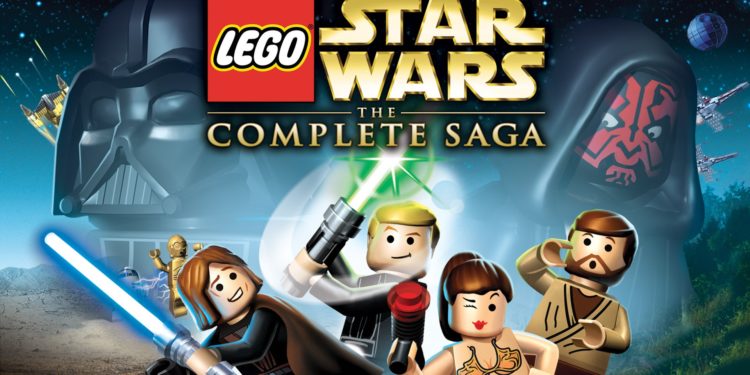 Verdict: Nostalgic, Funny, and Addictive.
In a Nutshell: LEGO Star Wars is buckets of fun, but if you’re not a fan of LEGO and/or Star Wars, it will probably start to drag on after a while.

Building on the success of both LEGO® Star Wars “block-buster” videogames, LEGO® Star Wars: The Complete Saga enables families to play through the events of all six Star Wars movies in one videogame for the first time ever.

Standard 3rd-person controls, move your character with the left stick, other buttons allow you to jump, use your weapon (light saber, gun, fists, etc.), use the force, swap characters, and build LEGO kits. LSW:TCS has a nice combination of platform running and jumping, puzzle-solving, and action elements.

LEGO Star Wars is easy enough to pick up and play that I was even able to get my non-gaming wife to play co-op with me on occasion. The levels are well-designed, and for the most part keep a good mix of challenge and entertainment. And believe me, it never gets old watching a wookie pop the little LEGO arms off a storm trooper.

I especially enjoyed the game mechanic of the “power bricks.” Well, once I figured out what they were, anyway. I spent the first 25-30% of the game totally clueless, as within the game itself, it gives you no clues what these “extras” are. Every level has one red LEGO brick hidden somewhere which, when found, unlocks the ability to buy an “extra.” These extras range from silly (e.g. – put mustache glasses on all characters and vehicles) to exceedingly useful (e.g. – invincibility). You can purchase the extras using “studs,” the game’s currency, which are spread throughout the game like coins in Mario or rings in Sonic.

Additionally, the Star Wars theme is done quite well, with all the most memorable scenes from the movies either being acted out by the player or viewed in a cutscene, often with various slapstick artistic liberties.

After a while it can start to feel like a quite grind if you’re going to try to actually complete everything the game has to offer. However, if you’re only interested in playing through the basic storyline of the 6 Star Wars movies, the game is probably only a 6-10-hour affair.

The extras are nifty, but once you’ve unlocked them all, the game becomes almost too easy. Of course, you don’t have to enable them once they’re unlocked (though I admit, it’s hard to resist), and the challenge and super story levels automatically disable the extras, so the “too easy” complaint doesn’t apply to those.

LEGO Star Wars: The Complete Saga may not be for you if you’re not particularly into LEGO, and especially not if you aren’t into Star Wars. That being said, I enjoyed it, and played it almost exclusively from the time I picked it up until I had completed every level and found every secret.