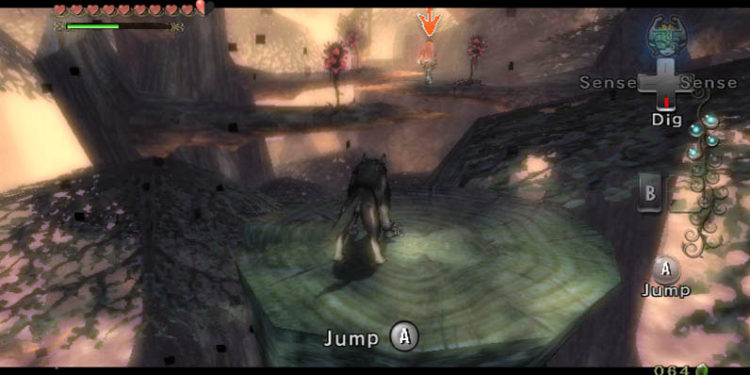 Verdict: My brain hurts—in a good way.
In a Nutshell: Third-person adventure/action game with a strong emphasis on puzzle-solving. Explore the vast world of Hyrule, go on quests, and watch the storyline unfold.

“When an evil darkness enshrouds the land of Hyrule, a young farm boy named Link must awaken the hero – and the animal – within. When Link travels to the Twilight Realm, he transforms into a wolf and must scour the land with the help of a mysterious girl named Midna.”

Use the Wii remote and nunchuck to move your custom-named hero (traditionally Link) around, exploring the world and facing off with a large variety of baddies.

The world Link has to explore in this game is quite large. The game does a good job of introducing you to his new abilities and tools/weapons at a steady pace throughout the game. By the end of the game your arsenal is quite large, with an inventory that could be very confusing / indimidating earlier in the game.

Twilight Princess has a custom configuration screen that you run the first time you pop the disc in. This helps pointing with the Wii remote to have much better accuracy and a more natural feel than other games on the system. Overall the controls felt quite natural and helped with the overall feeling of immersion.

There is a strong emphasis on puzzle-solving, which I enjoyed for the most part. The majority of the puzzles that you have to solve to move beyond an area were clever but not ridiculously difficult. For most of the game the difficulty felt about right. 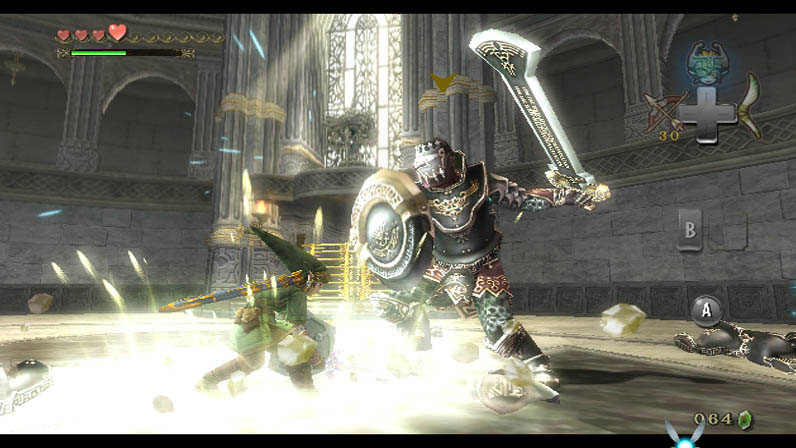 This game has tons to explore, but after 20 or 30 hours it starts to feel like a chore. The storyline felt incredibly contrived at points. “Go collect these four shadow-piece thingys.” I go collect them. Oh, snap! There’s the big bad guy, stealing the shadow pieces. “Now go find the magic mirror.” I go find the mirror. Oh, snap! The mirror’s broken into… four pieces! Guess what I get to do?

There was a particular action scene where the game got so hard that I put it aside and quit playing for months. I ended up going to Gamefaqs to find a strategy to beat that part (I feel so dirty), but even after reading the strategy, it still took me forever to get through. Not cool.

Most of the game was fun, but I would only recommend it to people that really like to pick one game and stick to it for day after day after day. It’s not the sort of game that you can really play a little here and there. It sucks you in for 2-3 hours at a time (minimum), and makes you want to keep playing so you can find out what happens next. Definitely fun, but not the kind of thing I’d be likely to play through again, and personally I would have been satisfied if the story line were about 10 hours shorter.